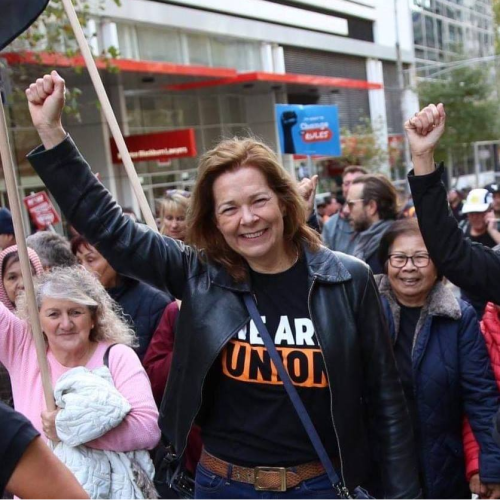 The end to lockdowns and restrictions is bittersweet, we can all celebrate seeing our sorely missed family and friends and newfound freedoms, but we would be lying to ourselves if we thought that we were all coming out of this equally.

Our frontline workers are exhausted, with 4 in 5 teachers now considering leaving the workforce. Many of us are financially stretched and facing an uncertain path through future lockdowns with disaster payments being cut prematurely.

The Morrison Government is proudly touting that there are ‘more jobs available than even before the pandemic’; but what is the point of it if it can’t pay your rent and bills and workers are having to work multiple jobs to survive more now than at any point since the ABS started keeping records.

A majority of these new post-pandemic jobs are insecure casual, gig-economy, and labour hire positions; which pay less than equivalent full-time permanent positions and don’t provide sick leave, annual leave or many of the basic worker’s rights that Australians should be able to rely on.

According to recent research by the Centre for Future Work, median weekly wages of workers in casual jobs are just $624 per week (in August 2020). That was barely half the median wages for permanent workers ($1300 per week).

In the midst of the pandemic the Morrison Government allowed corporations to further entrench the use of insecure work by legislating that any worker can be labelled as casual, irrespective of the true nature of their work.

It’s almost unheard of for profits to increase during a recession, this time, however, the pandemic (and resulting recession) actually enriched Australian businesses. Largely because of the huge government subsidies which were paid to businesses during the pandemic – all too often, unfortunately, without adequate conditions to ensure the money was needed.

From the December quarter of 2019 until the June quarter 2021, operating profits of private non-financial corporations grew by $17.6 billion per quarter, or 17.9%. That doesn’t even include the profits of the banks.

The overall share of corporate profits (including banks) reached a stunning 29% of GDP in 2020. That’s by far the highest in history. That long fattening of the profit share of our economy is perfectly mirrored by the sustained decline in the share of GDP going to workers in the form of wages, salaries, and superannuation contributions.

No wonder share prices, and the wealth of billionaires, has expanded so much even as the pandemic continued to take the jobs and lives of working people. Australia’s ASX 200 index hit its highest level in history in August 2021 – even as new lockdowns spread from NSW to Victoria and ACT. The stock market soared an incredible 58 per cent from last March 2020 (when investors worried what COVID would mean to corporate bottom lines) to today (when investors realised that government handouts would so substantially increase corporate profits, despite the continuing pandemic).

There could hardly be a clearer indicator of the disconnect between corporate greed and human well-being, than the record profits and record share prices that companies have reaped during this historic catastrophe.

Average nominal wages grew by 2.5 per cent over the same 18-month period. That represents an annualised rate of wage growth of just 1.6 per cent during the pandemic: the slowest in postwar history, and another step down from the record-weak wage increases that were being paid even before COVID hit.

Business profits grew more than 7 times faster than nominal wage rates during the pandemic. And even in absolute dollar terms, the growth of profits was far greater (almost twice as large) as the increase in wages paid across the entire national labour market ($9.2 billion per quarter over the same period).

Meanwhile, workers in casual and insecure jobs bore the brunt of the downturn while having their wages systemically suppressed. Refusal to adequately increase minimum and award wages, attacks on unions, and new Commonwealth laws allowing corporations to convert permanent work into casual jobs have all contributed to almost a decade of record-low wage growth which has continued through the pandemic.

If workers in casual jobs had received the same ‘pay-rise’ as non-financial private corporations over the last 18 months (17.9 per cent), instead of the record-low wage increases that have become the norm in Australia, average weekly wages for casual staff would be $96 higher than they are at present.

$96 per week might seem insignificant to the executives of those companies whose profits have reached new highs. But to a worker in an insecure job struggling to put food on the table, it would be a lifesaver. It would translate into an additional $5000 income per year. Lifting the floor in transport and logistics benefits everyone