Job security. That’s all Rylee Miller is asking for.

An aged care worker in Townsville, the 18-year-old isn’t concerned with a big-figure salary or how many holidays are coming her way. She just wants to know her job is safe and permanent.

“I’m eventually going to have a family, so I need to be able to provide for my kids and my partner,” she tells ACTU President Michele O’Neil on recent visit to far north Queensland.

“You know, be able to put food on the table at the end of the day. And that’s not going to be possible if I can’t have job security.”

Rylee works hard every shift to ensure her residents receive the best care possible, and is studying nursing in hope her current job turns into a long-term career.

While studying, she’s supporting herself financially, but remains a casual, facing every uncertainty that comes with it.

“I’ve asked my roster coordinator if there was a chance of me going part-time,

“At the time [I was told] it was not suitable.

“So [there’s] the insecurity of not having enough shifts every week and then worrying ‘am I going to make my bills? Am I going to be able to feed myself?’”

Rylee is just one young woman in casual employment. There’s thousands of stories like hers across Australia – all as important as the next – and all doing the best they can with the opportunities afforded to them.

Day-to-day, week-to-week, their future is already uncertain. But when something like the Morrison Government’s dangerous industrial relations bill appears on the horizon, Rylee says life only gets harder.

“I’m really concerned about it [the bill]. Because I’m worried that if it gets passed, I might not have a job. I might not be able to support myself.

“There are many people within my workplace that have two jobs just to support their family.

“It’s [the bill] not having a fair go. We’re trying our best. We’re going to work and you’re trying to take our rights away.

“You need to vote the bill down.” 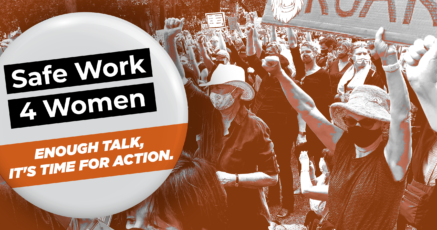